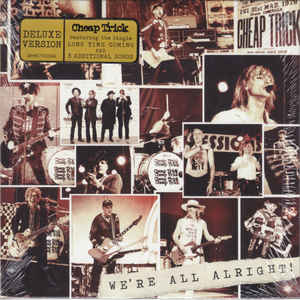 I still don't quite know what to make of this one.

When it first came out, I was horribly disappointed in most of it: while the band sounded as spectacular as they had on their previous album, about half of the songs on this album just seemed really poorly written, rife with clunky arrangements and riddled with some remarkably poor lyrics.  About a week ago when I started un-shuttering this blog, I wrote a real hatchet-job review of this album that I published for a day or two and then withdrew.

Why?  Because it made me listen to the album again.  And you know what?  It's still nor all that great compared to their other latter-day albums.  It's their weakest since 1994 by a large margin.  But you know what else?  It's really fun garbage - loud, energetic and consistently hard-rockin' -  and maybe there's a place in the world for that as well.  Or maybe I'm just a hopeless fanboy trying to make something out of nothing.  It's probably both.

Let's talk about the extremes first.  On the good side, "Like a Fly" is absolutely brilliant, an edgy bundle of nervous energy that plays like a fine sequel to Rockford's brilliant closer "Decaf".  Negating that is "Lolita".

You heard me right: "Lolita".  Let's all take a moment to cringe about that together, shall we?  The song is even worse than its title/concept.  It's based around the sort of rhythm sound that old farts think constitutes a "drum and bass loop", over which Rick Nielsen plays trashy leads as though he can't even hear the rest of the song, and Robin Zander sings creep-o-rama lyrics about...well, you know.  And right before your ears, there it is: in my humble opinion, the worst officially-released Cheap Trick song ever.  So sorry, "Ride the Pony", you're a bit further up the creek now.

Elsewhere, there's a ton of pastiche: AC/DC on "Long Time Coming", the Ramones on "Nowhere", even Cheap Trick on something called - get this - "If You Still Want My Love".  (Really?!)  All of which tells us what we already know: they have great taste.  But so what?

They play great.  They sing great.  Unfortunately, they just didn't write great this time around, winding up with a huge serving of enthusiasm in service of lyrics that read like late-career Aerosmith rejects sprinkled on top of a bunch of re-heated riffs.

And yet, "Lolita" aside, it's still kind of a fun listen.  I'm not sure why - maybe it's because they're great in general.

(And speaking of great, that collage-art album cover is a real beauty.  Also available in t-shirt form, in case you're looking to skip the album itself.)

COLLECTOR NERD ASIDE: For some bizarre reason probably known only to the marketing team over at the Big Machine Label Group, the CD and streaming/downloadable versions of We're All Alrght! exist in both a basic 10-track edition and a "deluxe" 13-track edition.  Obviously, this review is of the 13-track deluxe, as "Like a Fly" isn't even on the 10-tracker.  The vinyl only exists in the 13-track configuration.  Your guess is as good as mine as to why or for whom the 10-track version even exists.

The Japanese CD expands to 15 tracks with spirited live versions of "When I Wake Up Tomorrow" and "The In Crowd" from Bang Zoom Crazy...Hello.  Worth hearing for die-hards, if not necessarily buying as an expensive import.