I suppose there's no other way to truly plug this blog back in than to revisit one of its longest-running obsessions - and since it's not close enough to the Christmas Season to reopen that can of worms, we might as well catch up with the three - count 'em! - albums that Cheap Trick has released since my original Trick Tuesday series of album reviews wrapped up. 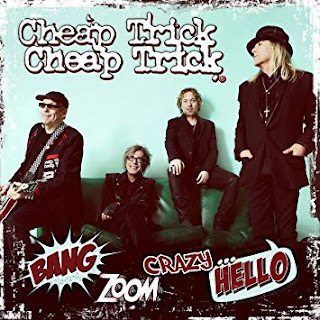 Wrong!  Defying all reasonable logic about how may times our boys have struck out during a key at-bat, Bang Zoom Crazy...Hello! is a remarkably strong and confident record.  If we consider the second half of their career to have begun with 1997's self-titled reboot, the obvious high water-mark of the "modern" CT era is unquestionably Rockford.  That said, I'd probably place this in a tie for second with the 1997 album in my rankings of their latter-day albums.  It's diverse without feeling disparate, and yet it never wanders too far from the tried-and-true.  Cheap Trick's hallmark power pop is well represented here ("No Direction Home", "The Sun Never Sets"), and well-balanced by both heavier fare ("Do You Believe Me?", fast-lane opener "Heart on the Line") and just enough quirk to remind you who this record was made by.

That last category is where Bang Zoom really lets its hair down and goes from very good to truly great.  A wonderfully imaginative cover of '60s rock chestnut "The In Crowd" nicely summons the off-kilter, somewhat menacing vibe of the band's peerless debut as though thirty-nine years had somehow not passed between the two recordings - no easy feat.  On the complete opposite end of the spectrum, "Blood Red Lips" is a glammy sing-along that has no real precedent in their catalog; maybe "ELO Kiddies" minus the sneer, but even that's a stretch.  It's a true, delightful earworm - shoulda been a single, in some other era when it might have made a difference and sold a record or two.

To be fair, Bang Zoom did sell a record or two. becoming their first top-40 album on Billboard since 1988's Lap of Luxury; you can probably thank Big Machine Records and/or the Hall of Fame hype for that.  Whatever the reason, those folks who hadn't tuned in for a while got a good earful of why this band is still so beloved by their fans: because they've still got it.  Not with an asterisk, not "they've still got it for a bunch of old guys", just "they've still got it."

COLLECTOR NERD ASIDE: the Japanese CD adds two bonus tracks, "I'd Give It Up" and "Arabesque", the latter of which also appears on a limited Record Store Day 10" called Found More Parts.  Both are good but not as good as anything on the album proper - but if you love the album, you'll probably want to seek them out.
Posted by Will at 5:00 AM