Not Quite the Wedding Blog, Part II: The Shower Essay

Yeah, I know that I promised this on Monday and it's now Friday.  Welcome, dear friends, to Wedding Preparation Time: four days pass like one?  Sounds about right.  Tomorrow, we head on up to our venue to finalize our menu...and then, once we're done there, probably eat at Cracker Barrel, which Alanis Morissette assures me is at least somewhat ironic.  (An aside: the smart, progressive down-stater in me cannot believe that I've now eaten several meals at a fucking Cracker Barrel.  The fat 'Murican in me doesn't care and loves his dumplings.  Ah, duality, how you kill me sometimes.)

Anyway, here's the essay I wrote for Rhea's shower.  Which, naturally, has nothing to do with Cracker Barrel.  #ShittiestIntroEver, as the kids might tag it.

Signs that a friendship is about to swerve across several lanes and left-exit onto the Something More Expressway come in different shapes and forms for everybody.  For me, ours was delivered inadvertently by a shriveled ex-member of the Rolling Stones.  Let me explain:

By the time we met Bill Wyman at a book signing at the Borders in White Plains, Rhea and I had known each other for a little while, having worked together and become increasingly closer friends.  For me, the journey started in December of 2001: broken hearted from a relationship that had recently tanked and feeling like I was spinning my wheels, I took a job with Borders for the holiday season.  I never meant it to be anything serious; I just wanted to put a few bucks in my bank account and get off the couch I’d been fermenting on for the past couple of months.  Once there, I met some interesting folks, made friends, and decided to stick around a bit longer and see where it all took me.  Chief among those friends was the girl who, on my second or third night of employment, came in in the vintage Aerosmith t-shirt.  I remember standing behind the cash register, talking to her about the shirt and the album/tour it came from (not one of Aerosmith’s most appreciated periods; the kind of thing only real fans would even know much about), and realizing that I might have just met someone who was the exact same flavor of nerd as me.  That’s always a great moment in life, by the way.

That conversation led to many more, first at work, then “hey, do you want to come to the bar tonight?”, then “hey, do you want to go to this concert with me?”, and finally, “hey, do you want to cut out of work early to GO AND MEET A ROLLING STONE?”.  Yes, yes, and yes, and so we did.  Did I mention that the man was shriveled?  Remember the California Raisins?  Like that, only not made of clay.  Nice guy, though; we chatted, he signed, we stood at the front of the store and had someone take the first picture of “us” (whether we knew it or not at the time), and then looked at each other.  I don’t remember who said what, but the conversation went like this:

“Are you ready to be done with tonight yet?”
“No.”
“Want to go to the Pipers Kilt?”
“Absolutely.”

And off we went to our favorite bar to discuss, dissect, dream and bond even further.  That was the night I was sure I’d know this woman for a long time to come.  I don’t know that I was exactly in love yet (or, perhaps more honestly, that I was admitting it yet), but I did know that Rhea was going to be something much more important to my life that just the cool chick I met while working in the record store.  There was work to be done on both sides between that moment and when we made that swerve-and-exit I mentioned back at the beginning: ghosts to be faced down and dispatched, debris in the general vicinity of the heart that needed housekeeping, that sort of thing.  But looking back on that night all these years later, while writing this for our shower/wedding: God, I was so right that night…and what an amazing journey this has been ever since. 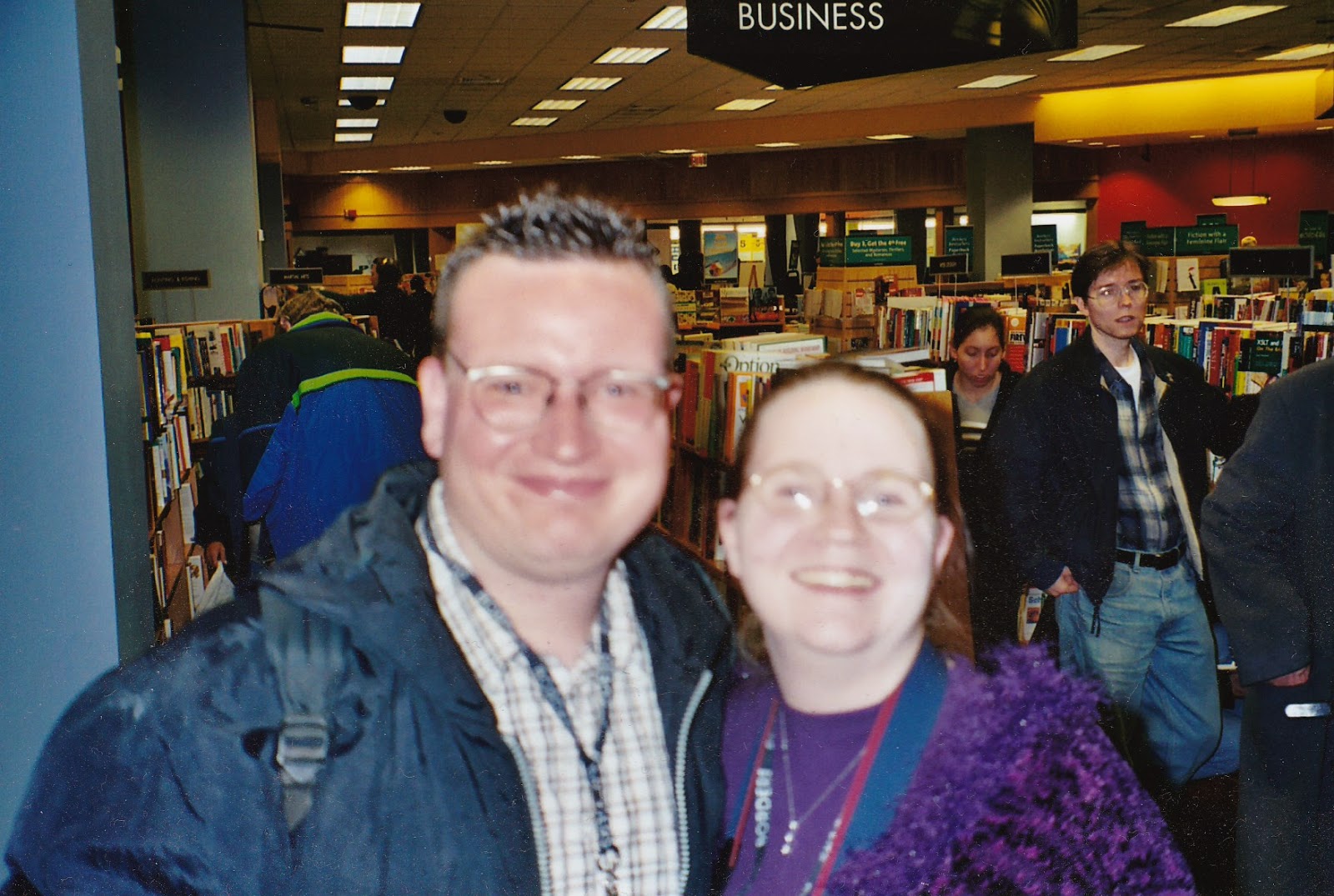