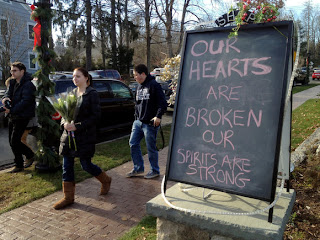 I’ve no idea how I could even hope to write a funny and/or cute article about the holidays today.  Like everybody else in the world, I am at a complete and utter loss to even put my feelings about what happened two days ago in Newtown, Connecticut into any sort of rational order, let alone try to reconcile it all and come up with some sort of logical conclusion about the tragedy.  If nobody has Facebooked it to you yet, you should take a few seconds out and read this article over at The Onion.  Whether it’s even comedy is debatable, but man…talk about the nail hit squarely on the head.

In last year’s holiday run, I posted about a teacher near where I live who took it upon herself to inform her young pupils that there is no Santa Claus.  In light of what happened on Friday, even debating such a thing seems hopelessly silly; almost quaint, really.  In that post, I posited that there is nothing wrong with letting young children believe in Santa, that he is simply a way for developing minds to personify and understand the spirit of giving and goodwill until they’ve reached a comprehension level where they no longer need the ideas wrapped up in red.  I think that applies here, too.

I’ve seen a fair amount of discussion of the fact that this has happened at the holidays, and what Christmas might possibly mean to the families of Newtown in the wake of this horror.  In some ways, I think that those families need Christmas and Santa now more than ever.  If there is any vestige of innocence left in any of those poor children, it needs to be respected and clung to mightily.  Christmas is normal.  Santa paying a visit on Christmas Eve is normal.  Normalcy is, in whatever quantity it’s even possible to create the illusion of, the best present I could imagine any of these bereaved children receiving this year.  Think of it as a re-affirmation of secular faith, a way to broach the idea that it's still okay to trust other people, and to believe in the values you’ve always held dear.

As I’ve mentioned elsewhere on this blog, my Rhea is in graduate school, studying for a dual masters in Early Childhood and Special Education.  As such, I’m sure you can imagine her reaction.  In moments like this, it’s my job in our never-ending dance to be the calm, rational one.  Without a doubt, this is the most difficult that role has ever been for me: how, after all, do you remain rational about a horrifying tragedy that has no sane, lucid explanation?  I think I did an alright job; at the very least, it was the best I could do.  You know the cliché about the man staying stoic and controlled, only to completely lose his shit once he’s safely alone?  I guess it does actually happen like that every so often. Who knew?

In the midst of consoling Rhea – or at least letting her talk out what she needed to about it all – I hit on one thing that I think was completely spot-on, and I’d like to share it with all of you as well.  I told Rhea that there were really two stories here: the one that we’re immediately familiar with, unspeakable in its horror and darkness.  The other story, the one that we must try to keep near the front of our thoughts even as we’re deluged with the terrifying and incomprehensible details of the Newtown massacre, is that more than 99.9 percent of the billions of human beings currently calling Earth their home agree with us that what has happened is unspeakable, unacceptable and unrepeatable.  No matter what our other political and theological differences, we are to a soul united in our abhorrence of what has happened, and our empathy and sorrow for the victims.  If that is not the spirit of Christmas, if it is not the intangible value system made accessible by the character of Santa Claus, then I’ve simply no idea what is.

Merry Christmas to all, and to all a half-decent night’s sleep.  With any luck, “a good night” might once again end that wish sooner than later.
Posted by Will at 12:59 PM