[Christmas Present #2] Latke Larry and the Festival of Lights

Ah, Chanukah, that enigma wrapped in a riddle wrapped in potatoes and onions and then fried.  I never really have gotten to the bottom of its significance as a holiday.  Sure, I’ve digested what Wikipedia has to say on the subject, and I’ve polled those whose backgrounds have had the festival of lights as a “thing” for longer than I have, but mostly I’ve come up a bit short.  The best thing anyone’s ever told me came, as it often does, from my beloved Rhea: “Actually, it’s not really that important a holiday.  Mostly, it’s puffed up to be more than it is because it falls near Christmas.”  I think I’ll go with that – it makes sense to me.

It also falls in perfect line with how I view and celebrate my Very Agnostic Christmases: as a largely secular celebration of family and togetherness that just happens to derive from religious history and tradition.  From that perspective then, I give you a list of things that largely defined last night’s Chanukah Kick-Off, in roughly chronological order:

1)      Latkes.  Celebrated in last year’s Chanukah post, referenced in the first sentence of the post you’re reading right now, and salivated over for every moment in between.  Seriously, folks: I don’t care if you worship Jesus, the Easter Bunny, Satan, Steven Tyler, or the Nor-Easter Bunny; we are talking about shredded potatoes which are mixed with Onions and then fried.  If that doesn’t sound like good times to you, then the terrorists have truly won.

2)      Siblings.  Namely, Rhea and her brother Alan, who between them made the latkes.  They did a great job, and clearly had a great time in the process.  Sometimes, a good in-law like myself just takes Billy Joel’s sage-like advice and leaves a tender moment – or even a tender hour-and-a-half – alone.   Which leads us to:

3)      TruTV.  World’s Most Shocking Chicks Who Got Arrested!  Hillbilly Meth-Head Roundup!  Wipeout!  Just the kind of drivel to pass the time when all around you are cooking, bonding and cleaning and no one really needs your help.  Woulda been perfect if they’d been showing Killer Karaoke – my new most-est favorite-est empty calories on television – but nearly perfect is certainly close enough.

4)      Beer.  An obvious accompaniment to all of the above.  Alan’s much more of a connoisseur of the hops and barley than I am, but I gotta admit that everything I tried last night was delicious.  I’m not a huge fan of beer that doesn’t taste like beer; if I wanted chocolate or coffee, I’d have some, but all of last night’s selections tasted both (a) like beer, and (b) delicious.  Cheers!

5)      In-Laws.  A quick spin around the blogosphere – hell, even around my Facebook feed – reminds me how lucky I am to not only love but also respect and like mine.

7)      Gifts.  I need to backtrack a bit here: in preparing for my family’s Thanksgiving dinner, an accident occurred in which I broke a bunch of my most-used pint glasses.  For the most part, this was really no big deal: you use them, and they eventually wear out or break.  (It’s a lot like life itself, if you think about it.)  That said, there was one – a White Castle Coke glass – which I’d had for a few years and really used more than any of the others.  ‘Twas truly a bummer to see it go.  Yesterday, I received the following from my darling Rhea, wrapped in a towel in a shoebox: 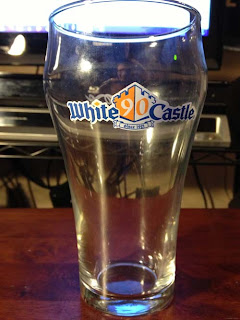 At the end of the day, I may still not understand the true historical significance of Chanukah, or even which of its eight thousand spellings is correct.  But family that I can truly appreciate and enjoy, and a partner who knows what the right present is?  I get all of that – and how precious it truly is – perfectly.
Posted by Will at 5:40 PM