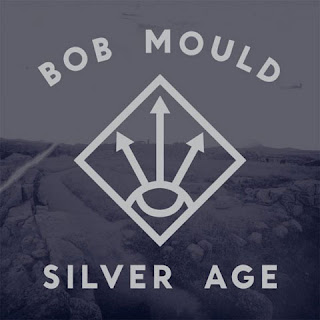 First off, please allow me to refute a phrase I keep seeing in other reviews of Silver Age: this fantastic album is in no way a “return to form” for Bob Mould.  If anyone really thinks that it is, I beg of them to give his last two, 2008’s District Line and 2009’s Life and Times, another try.  They’re both fine records chock full of the emotionally and melodically engaging material that Mould’s name is practically synonymous with.

What Silver Age does represent is a return to a band feel, reminiscent of Mould’s early ‘90s time fronting Sugar.  The main difference between Mould’s last few albums and this one is the livelier, more off-the-cuff feel of its production and presentation, and that’s entirely the difference between mostly going it alone, as he did on his last few albums, and recording with sympathetic accompaniment, as he does here.  I can’t say enough good things about bassist Jason Narducy and Superchunk drummer Jon Wurster, and the electric charge they’ve brought to this batch of songs.

And what a selection of songs it is.  Every now and then, even an artist as consistent in writing quality as Mould comes up with a batch of new ones that’s juiced with that little something extra.  It’s an intangible quality, well beyond what a critic can describe in words, but as fans we all know it when we hear it.  Delving into Silver Age’s individual tracks is nearly pointless: they’re all top caliber, and they all bounce off one another in that way that only happens on truly special albums.  The lead single, “The Descent”, is a good choice as far as a four-minute sampler for the album goes, but really: if you’ve ever loved any facet of Mould’s career, Silver Age is a sure bet.

His current live show is also a sure bet: opening with the entirety of Sugar’s 1992 debut Copper Blue, surely one of Mould’s absolute career highlights, then offering a good chunk of the new album before settling into a final run of Hüsker Dü classics, his performance at Williamsburg Park in Brooklyn last Friday night was a complete winner.  I haven’t always been sold on Mould playing the Hüsker catalog with other bands, but Narducy and Wurster are absolutely the right men for the job.  The latter in particular was able to incorporate the signature idiosyncrasies of Grant Hart’s drumming into his own, more tutored playing without sacrificing the character and charm of Hart’s original parts.  As for Mould, he’s never seemed so at ease with himself and his songs as he does right now, and it shines through in his performance.

One of the evening’s more memorable moments came courtesy of Hold Steady frontman Craig Finn, who guested on vocals for a rousing version of Hüsker Dü’s classic “Something I Learned Today”.  By any objective standard, Finn’s performance was so-so: his vocal style isn’t a great fit with the song, and he seemed to get a bit lost lyrically here and there.  So why was it great?  Because he was the embodiment of everyone in the audience: the wide “I can’t believe I’m singing a song from Zen Arcade with Bob Mould” grin wasn’t something he could have faked if he tried.  He, like myself and the rest of the assembled crowd, probably grew up with and to Mould’s music, and let’s be honest: if Mould asked me to sing “Something I Learned Today”, I’d probably goof up out of excitement a few times, too.

To grow up with an artist’s music is an amazing, personal thing, and Zen Arcade is certainly one of those albums that a lot of folks somewhere between my and Craig Finn’s age grew up to.  To be able to continue to grow with that same artist’s later work is the mark of true greatness: Silver Age means as much to me right now at thirty-eight as Copper Blue did at eighteen, as Zen Arcade would have meant to me a year or three before that if I’d been cool enough to know about it then.  Really, there is no greater compliment one can offer an artist than that.
Posted by Will at 10:55 PM