It’s taken a week for me to write and post this for a reason – sometimes, when you spend a visceral weekend with the music that’s closest to you, it takes a bit longer to process, to sort out its implications, than to simply say “that was awesome” and move on.  Last Friday and Saturday – first at the Brighton Bar in Long Branch, New Jersey, then closer to home at the Bowery Electric, I saw D Generation do two brilliant, blistering shows that were hardly classifiable as “reunion gigs”.  The show that they did at Irving Plaza back in September was a reunion gig – a brilliant one, but also a reminder/celebration of times gone by.  This weekend’s shows, by comparison, happened in the present and pointed enthusiastically toward the future.

It can be hard to even express how you’re made to feel by the music closest to you.  D Generation, perhaps more than any other band, soundtracked my twenties: they were loud, smart, great players, and aggressively local, to the point where I have no idea how many times I caught ‘em way back when.  They were bright and colorful in a black-and-white time for music, taking cues from glam, punk, classic hard rock and whatever else, and landing back somewhere near ROCK ‘N’ ROLL in an era dominated by cheap knockoff Cobains standing on stage unmoving, gazing at the floor and screaming perfectly sculpted hymns to their unearned ennui.  Given the timeframe, it was predictable as it was unfortunate that D Generation didn’t make it bigger.  I’m not sure that 2012 will be any more welcoming an era, with its fifteen-minute pop clones and Nickelback/Daughtry adult-contemporary versions of the same sludge I just described, but I am sure that we need D Generation now, just as we did back then.

Fortunately for us, they are once again alive and vital.  They wasted no time underlining that fact on Friday night in Jersey, opening their set with “Apocalypse Kids”, a magnificent new song that was simultaneously thrillingly brand new and an easy fit with the canon.  It was the first of two new songs; the other, “Piece of the Action”, has been stuck in my head for a week now.  The new material was exactly what I wanted: it sounded like D Generation now, in 2012; older, wiser, still connected with the unique fingerprint of their sound but very much aware of the time that has passed and the lessons that have been learned since Through the Darkness, their 1999 finale, was released.  The new songs gave the old ones a fresh context, ushering even the slightest whiff of nostalgia quickly out the door.  What was left was rock at its finest: smart, loud, timeless.

I am eternally grateful to this band for, as I said above, soundtracking my twenties.  I left the two shows last weekend as enthusiastic as one could possibly be to hear what they now might have to say about all of our (relative) adulthoods.  At the very least, I am giddy about the planned fall release of their fourth album in a way I haven’t been about any new music in a very long time.  That’s quite a gift for an aging music nerd to have been given, when you think about it.  Thank you, gentlemen…just thank you. 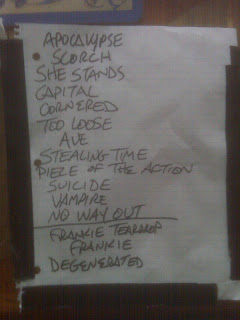