[Meta-note: hey, it's a new series all about albums I think are significantly better or worse than their reputations!  Tell your friends!] 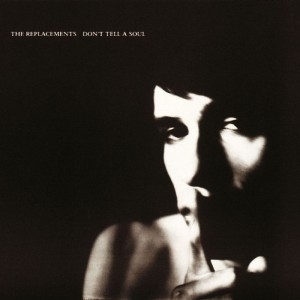 I remain mystified as to why I’m supposed to hate this album so much.  As far as I can figure, it comes down to two main “problems”: it actually spawned the Replacements’ one sorta-hit single, and it isn’t quite as good as the three albums that preceded it.  Those are two pretty lousy reasons to cast aside an album as strong as Don’t Tell a Soul, but I’ll be a diligent blogger and indulge them.  In order, then:

1)      OMG!  “I’ll Be You” actually got airplay on MTV and the radio!  The Replacements weren’t my little secret anymore!  Man up and stop crying, little rock snob.  The radio and MTV playlists of 1989 needed a little bit of post-punk Stonesy rock to go with their synths ‘n’ hairballs, and there were few (if any) better-positioned bands to deliver it at the time than the ‘Mats.  Getting them heard in daylight hours was a good thing…and secrets are for little children who don’t know how to share.

2)      But Don’t Tell a Soul is a slickly produced piece of sell-out crap compared to the “holy trilogy” that preceded it.  Slickly produced?  Yep.  Sell-out?  Debatable – and not an exceptionally profitable one even if it was.  Crap?  Not even remotely.  Not as good as Let it Be / Tim / Pleased to Meet Me?  You’ve got me there, but honestly: few rock bands ever go on a run that inspired.  An album that’s 80% as good as three masterpieces is still going to be 90% better than most of the other stuff out there.  (I never claimed to be a mathlete, but you get my point.)

Trying to find a review of Don’t Tell a Soul that doesn’t use the phrase “slickly produced” or a synonym thereof is sort of like trying to find a day that doesn’t end in “y”: a fool’s mission if there ever was one.  But seriously: what was there left for the Replacements to do after Pleased to Meet Me but attempt to move on up?  The indie/rock-snob world was already neatly bundled up and living in Paul Westerberg’s den by 1989.  Critically speaking, he could have released forty minutes of himself gargling Carpenters songs and been hailed as a genius by hipster cognoscenti worldwide.  In fact, he more or less did that a few years prior; I hereby submit to the jury The Shit Hits the Fans, and its continued desirability as a collectible artifact.

So yeah, slick production, sky is falling, video on MTV, yadda yadda.  What about the songs?  It’s funny how nobody ever seems to mention them, likely because doing so would mean admitting that Don’t Tell a Soul doesn’t actually suck.  It is true that there are more ballads/mid-tempo songs here than on any prior ‘Mats disc.  It is also true that these songs are intelligent, clever and insightful – all adjectives generally associated with Westerberg’s songwriting.  They are also evolved, a shade or two more adult than the likes of “Skyway” or “Sixteen Blue”, and I think that quality is at the heart of Don’t Tell a Soul’s undeservedly bad reputation.  It’s the Replacements album that might mean more to you at 37 than it did at 17, and that’s just not likely to fly with rock snobs, a group notoriously touchy about their inability to resist aging.

As for me, I’m fine with my age (it’s one of the two mentioned in the last sentence; you guess which), and this is the Replacements album that gets better and better with time for me.  One could argue that it sort of invented “adult alternative” as a genre, and one could simultaneously argue that it bettered most of its competition in that genre from the word “go”.  Beloved artists like Ryan Adams and Wilco clearly took a page or three (or an entire career, really) from the Don’t Tell a Soul playbook – and if those artists left as many rough edges and as much rock ‘n’ roll in their slickly-produced maturity as the Replacements did, I’d find them as consistently interesting as I find Don’t Tell a Soul.

One final argument: if I were forced at gunpoint to pick one-and-only-one favorite Replacements song, “Darlin’ One” might just be it.  Beat that for a recommendation.
Posted by Will at 10:46 PM