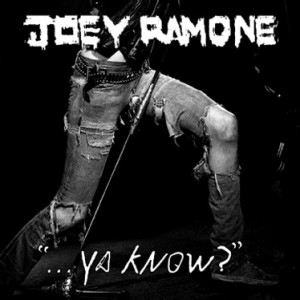 In some ways, I’ve been dreading this one as much as I’ve been looking forward to it.  I miss Joey immensely, as every Ramones fan does, but I also feel that Don’t Worry About Me, the album he obsessed over and nearly completed before his death, served as a perfect self-penned epitaph.  It was an album chock full of great songs and some of the strongest vocals of Joey’s career, and a decade removed from the sad circumstances of its release it remains a must-own for any serious rock fan.  If you’ve never heard it, do yourself a huge favor: put this review down for a minute, click on over to your favorite music retailer and/or pirate site, and plug that hole in your collection.  You’ll be better off for it, believe me.

As much as I loved the idea of hearing “new” Joey, I was also unconvinced that Don’t Worry About Me really needed a follow-up; if Joey painstakingly designed that one as his musical last will and testament, who are we to argue?  I started to feel a bit better about …Ya Know? once I saw some of the names involved in its creation: Little Steven, Bun E. Carlos, Joan Jett, Ramones producer Ed Stasium – these aren’t people I’d imagine involving themselves in some half-baked grab-bag of leftovers.  I still had my misgivings, but I duly placed my order, and finally got around to spinning the thing today.

Verdict: it’s certainly a grab-bag of leftovers, but it’s a better one than I’d ever imagined.  It’s not a STATEMENT on the order of Don’t Worry About Me, but it is forty-five minutes of songs worth hearing by one of rock music’s most consistently underrated vocalists, spit-n’-polished for release by musicians with a good, honest love for the man and his music.  I can’t at all speak to whether or not Joey would have done anything with this material if he still walked among us, but since he no longer gets a vote I’m very glad to have it.  These songs were clearly not written to sit together as an album, but taken one by one they’re uniformly strong.  The two Ramones remakes, “Merry Christmas (I Don’t Want to Fight Tonight)” and “Life’s a Gas” are winningly stripped-down from that band’s more familiar versions, and the thirteen new songs are all completely charming.  I don’t have any early favorites, but in that good way where the whole thing is far stronger than I’d ever guessed it would be.

…Ya Know? doesn’t tell us anything we don’t already know about the late great man: he loves New York City, he’s a bit on the lovelorn side, and he’s one of the greatest, most unique singers rock ‘n’ roll has ever produced.  What it does do is give us one more unexpected chance to spend the better part of an hour appreciating him, and that’s more than enough.
Posted by Will at 5:11 PM