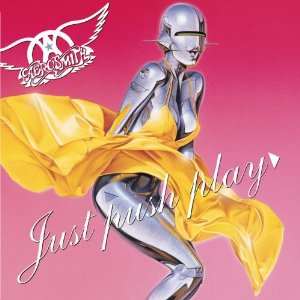 First things first: what’s with that sorry-ass album artwork?  I mean, really: a robot babe?  On an Aerosmith album?  Listen, Steven, Joe, everybody else: you guys get laid.  In fact, you’re famous for it.  So why don’t we leave the mechanical hotties for those terminal virgins in, say, Styx and their fans next time, okay?

Comedy aside, I’ve been dreading this particular review since this series began.  Just Push Play is an absolutely horrible album, seemingly made simply to satisfy the terms of a record contract by a band that had next to no interest in making music together anymore.  It’s Aerosmith’s worst studio album by a very wide margin.  It’s an album where none of its creators seem the least bit engaged by – or, for that matter, even particularly interested in performing – the uniformly pedestrian or worse material.  That it stands, as of this post’s publication, as their last album of original material is a crying shame, as it’s a completely undignified end to a largely brilliant career.

By now, you may have guessed that I don’t listen to this one much.  It’s probably been at least five years or so since I last front-to-backed it, but I did so last night.  It is said that it's stupid to suffer for art, and last night's listening session served as a severe (if unnecessary) reminder of that.  What follows, then, are my notes as typed while listening.  Sure, I could have taken more time to whip these ideas into a cohesive review, but then again Aerosmith could also have taken the time to whip Just Push Play into a cohesive album.  In that spirit, let’s let the criticism match its object.

Beyond Beautiful: Halfway-decent BIG FM RADIO ROCK, made distinctive only by Tyler’s vocals, which are far better than his nondescript lyrics.  Likeable enough, but could have benefitted greatly from a bit more TLC.

Just Push Play: Absolutely hideous attempt to sound “current”.  One of the most forced things I’ve ever listened to, from the pseudo (very pseudo, says your humble author who, like the rest of the world, has been listening to a lot of Beastie Boys these past few days) hip-hop production flourishes to pathetic lyrics that actually contain the phrase “pimp daddy.”  The worst song in their entire official catalog?  It’s possible.  On second thought, scratch “possible” and substitute “without a doubt”; I just hit the “Walk This Way” reference and the “fuckin’ A” chorus near the end.  Fuckin’ ouch.

Jaded: I’ve always had a bit of a soft spot for this one, as Aerosmith’s latter-day hit singles go.  Pure power-pop, right down to the very Cheap Trick-ish BIG CHORUS.  Of course, Cheap Trick would have had the good sense to pick the whole thing up a tempo notch or two…

Fly Away From Here: Guess what?  They still don’t want to miss a thing!  File under: lame sound-alike.

Trip Hoppin’: Sadly, the song is no better than its title.  Even the horns – and, generally speaking, I love it when Aerosmith uses horns – can't do much for this sad effort.  Next.

Sunshine: More “Jaded”-ish power pop.  Not terrible, but it could use a more memorable chorus

Under My Skin: Loud, skillfully orchestrated, not bad.  Dig the Beatles-outta-nowhere chorus change; it’s both unexpected and welcome.  Still, I’ve got to wonder: did Tyler spend more than two hours total on the lyrics to this album?  Because we’re halfway done and I haven’t heard a single clever turn of phrase yet.  Which, in this case, is really too bad: with a few of ‘em in tow, this song could have been A-list material.

Luv Lies: It’s amazing how much this sounds like “Crazy”.  See what I did there?

Outta Your Head: Enough with the badly-executed drum loops already, wouldya?  They stopped being hip at least five years before this album came out, and I’m being generous with that timeframe.  Is that “men from mars” bit in the first verse supposed to be a reference to Blondie’s “Rapture”?  Because the quality level of the rapping itself in both songs is about equal, which is not a compliment.  Anyway, they should have issued a single of the title track with this as a B-side…and immediately shot every last copy straight into the center of the sun.

Light Inside: Relatively heavy compared to the rest of this sorry pile of tracks, but also completely and utterly forgettable.  Sadly, it’s still the third or fourth best song on the album.

Avant Garden: Ah yes, the epic album closer.  It’s as forced and stilted as its title, and it mentions lucid dreaming at one point.  Sorry gents, but Queensryche already beat you to that one, and rock ‘n’ roll absolutely didn’t need a second song on that particular topic.

(Hidden junk after the last song): Trippy, man, trippy.  Does this mean that it’s finally over?

Thankfully, that’s exactly what it meant.  As I type this, there is a lot of conjecture as to what the album Aerosmith are currently (allegedly) putting the finishing touches on right now will sound like.  Personally, I’m not being unrealistically optimistic, but I do have my fingers crossed because I desperately want it to at least be better than this.  Thankfully, Just Push Play isn’t how Aerosmith will be remembered anyway – honestly, is anyone really going to cue this one up in five or ten years’ time when they could be listening to Rocks or Pump? – but it also shouldn’t be how they went out.  I’m not saying that to be snide or snarky, either.  I’m saying it as a fan who knows that they were capable of better than this at the time, and who believes on some level that they may still be.