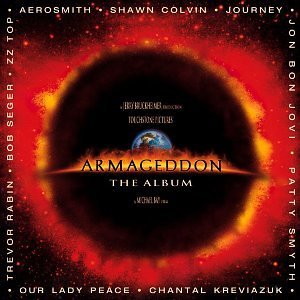 First things first: I am perfectly aware that some of you saw that I decided to lump the Armageddon soundtrack in with this week’s review and began salivating in anticipation of the seemingly inevitable ripping-to-shreds.  I’m gonna let you down early, then: it’s not exactly going to go down that way.  Surprised?

My tastes – even the relatively small percentage of them that I’ve written about on this blog – are what they are: louder, faster, skip the damned ballads!  It’s no surprise (surprize?) then that “I Don’t Want to Miss a Thing” probably wouldn’t even make my Aero-Top-100.  Long ago, Diane Warren and I decided to simply admit we had very different tastes and leave it at that.   Still, no matter how undeniably cheese-tastic the end result is, I just can’t find it in my heart to dump on Steven Tyler for wanting to record the big theme from a film that was poised to be his daughter’s breakout success as an actress.  It’s a noble, charming thing to do, and the fact that millions of record-buyers liked it made it squarely a win for everybody besides me.  In this case, I’ll happily lump it.  Besides: no matter what my opinion of the relative quality of the song as a composition, Tyler sings it extraordinarily well.  Listen in a bit closer the next time you’re stuck with it in the post office or Walgreen’s or wherever, and you’ll hear what I mean.

Moving right along, then….wait, there was another new Aero-tune on the Armageddon soundtrack?  There was indeed: a rocker called “What Kind of Love are You On”, to be precise.  It’s not a bad little number, either; while it’s never completely captured my imagination, Rhea loves it to bits.  I’ll completely defer to her on this one, as should you. 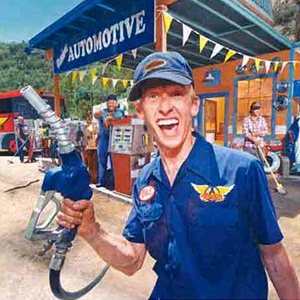 On to A Little South of Sanity for real this time: it’s okay.  More than okay, actually: it’s fairly decent.  Jack Douglas, who mixed the whole thing, gets the sort of beefy, ballsy sound he’s held in such high regard for, and the generous twenty-three song track list gives you a good idea of what Aerosmith was playing live in the mid ‘90s, and what they sounded like then.  So, given all of that, why do I never end up pulling it off the shelf?  Because, despite its charms, it’s still a patched-together contract-filler.  Is it better than you’d assume the second you saw the Geffen – and not Columbia/Sony – logo on the back cover?  Absolutely.  Is it at all necessary in a post-file-sharing world where any number of well-recorded, full shows from the same era is little more than a few seconds of Google-fu and download-delay away?  Not so much.

Might it then serve as a decent, well-recorded sampler and advertisement for how great Aerosmith, regardless of anyone’s opinion of the quality of their contemporaneous studio output, was on stage at the time?  Yeah, I think that’s the ticket.  You could easily go your whole life without ever hearing A Little South of Sanity and be none the poorer for it.  You could also throw it on during your ride to work tomorrow and smile a bit wider for having done so.
Posted by Will at 7:51 AM