It ain't earth-shattering, but I hear some real snarl in those guitars again.  There's plenty of blabber elsewhere on the web about the somewhat rough quality of Steven Tyler's vocals, but I think they actually work well with the song.  He sounds real, mercifully underprocessed, honest, and a bit edgier than on most other recent Aero-fare.  Nice to hear some real swing in the rhythm section again, too.  It's not quite perfect: the lyrics are a bit paint-by-numbers, and the main verse riff (the one at about 0:25 or so) clearly derives from Led Zeppelin's "The Wanton Song".   Still, I say we cut 'em some slack this time: after all, better to sound like Zep than to snooze your way through some Diane Warren ballad, am I right?

Complaints found elsewhere on the inter-tubes that this doesn't sound like something from the Toys in the Attic/Rocks era are utterly ridiculous - did you really expect such a thing?  Because I'm a realist, and I certainly didn't.  What we've got here is a slice of late-era Aerosmith that's far more Pump in feel than Just Push Play, and that's certainly a change I can believe in. I find myself cautiously optimistic about the album: this song is good, and I dig the retro-kitchy artwork, easily their smartest-looking packaging in many a moon. 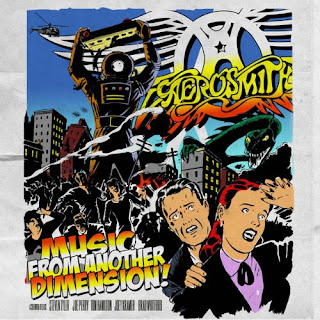