Rhea, last night, after listening to Eddie Trunk’s Friday Night Rocks in the car for a while: “He played the new Whitesnake.  [Long pause.]  I think I liked it.  I’m so ashamed.”  First, I did what any fine upstanding music snob with several gigs of Hüsker Dü bootlegs on his hard drive would: laughed and mocked.  Then, I did what any fine upstanding human being who wants to keep his long-term relationship on track and not have it bog down over stupid things like hair metal would do and told her to go forth and enjoy.  If it makes her happy, it's more than alright with me.  Snobbery’s a laugh, but fun is fun – and love conquers all.  I believe that with all my heart and soul, and I’ll swear to you on every last megabyte of those Hüsker bütlegs that it’s true.

Still, I was curious: Whitesnake?  Honestly, they’re not a band I’ve ever heard Rhea wax nostalgic for, nor have I ever seen any evidence of fandom in her music collection.  Rhea’s not one to ever be guilty about her musical pleasures, either; honestly, I’ve learned much from her over the years in that regard.  I spent most of this morning and afternoon curious; by the evening, said curiosity was killing this cat and I took the bait and gave the damned thing a listen.

The first thing you should know about Forevermore (actually released about a year or so ago) is that it is not much concerned with the present.  The album’s overall production has a compressed, modern feel (guess even old farts want to be loud on your iPod, and why not?), and singer/mainstay David Coverdale’s voice is audibly more than two decades older than it was back when he drove around Los Angeles with Tawny Kitaen on the hood of his car every five minutes on MTV.  Those two things are Forevermore's only brush with modernity; otherwise, just throw this baby on and it’s never not been 1987.  And you know what?  I think I like it that way, at least where this silly record is concerned. 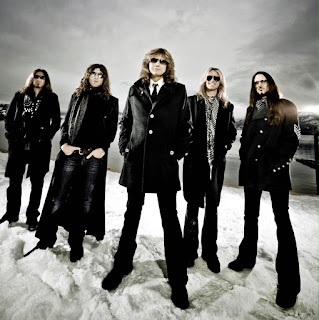 In that spirit, Forevermore is an apt title for this album.  If you loved ‘em way back when, there’s a good chance you’ll at least strongly like ‘em now.  I’ll give David Coverdale this: it would seem that he’s aware that there is no real way for a band named after his penis to truly mature, and thus he wastes no time even trying.  To hell with the here and now, folks, and welcome back the old gang intact: wanky guitar solos.  Obvious, endlessly chorus-repeated hooks a mile wide.  Coverdale’s dime-store Robert Plant imitation.  All present and accounted for, and all still treading water in a sea of retarded sexuality and bad poetry.  As snide as I’m being (for that is my job as a music blogger after all), it’s all very impressive in its way; in fact, it’s almost enough to make you believe that the Sunset Strip is still buzzing with motor-sikkles (because, in this context, it’s gotta be pronounced just like Vince Neil says it) and drenched in Aqua-Net.  The good old days are never really all the way gone, are they?  I suppose not, and I suppose that’s not entirely a bad thing either.  Granted, this isn’t exactly the style of late-‘80s music that I’m personally most nostalgic for, but that’s mostly splitting teased hairs.  If the very idea of a recent Whitesnake album sounds like it might be your idea of fun, Forevermore delivers on that idea.  What more could you possibly ask of it?

One last thing, while we’re on the topic of nostalgia: the CD I downloaded bought from a magical, time-travelling, never bankrupted Tower Records that only I know how to get to has three extra songs.  Ah, extra songs on a limited edition, just like the good old days.  Makes the heart of this old record collector swoon, I tellya.  Just to bring the nostalgia all the way home, all three of ‘em suck – right, also just like in the good old days.  To be specific, all three are pointless remixes of songs already on the album proper; unnecessary filler down to the last millisecond.  Do you know what’s truly better now than back in the good old days?  Select files and drag > Drop in the RECYCLE BIN > Gone, ahem, forevermore.  I don’t even have to be bothered holding my nose up in the air while pointedly NOT (harrumph!) including them on a dubbed cassette copy for my Walkman anymore.  Seriously: how sweet is the magical future in which we currently reside?

Just as sweet as the past upon which it was built, actually.
Posted by Will at 10:34 PM