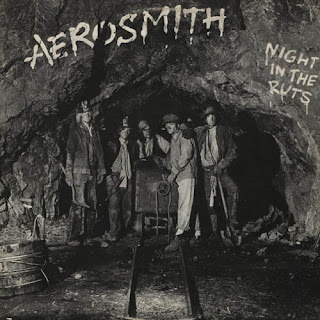 Three factors that pretty much guarantee that your new album won't exactly rank among your best:

1) Your famous and popular guitarist quits mid-way through the sessions.  He is replaced for the time being by pretty much anyone in proximity to the recording studio who can play a chord or three.

2) Said guitarist also had a large hand in writing a good two thirds of your material prior to his departure.

3) As a result, your new album will now feature three covers out of a total of nine tracks, which even a math-deprived writer-type like me can figure out is a full one third of the record.

So, yeah, Night in the Ruts is a clear B-list'er from the word "go".  It's a strong one in some ways though, made worthy of pickup at the bargain-bin prices it can now be had for by its strong moments.  Of the six originals, three are winners that deserve consideration in any serious study of '70s Aerosmith.  "No Surprize" is a clever, tongue-in-cheek re-telling of the band's story to date, and the spot it's since found on some of the band's deeper-reaching compilations is well deserved.  Right next to it on those compilations should be "Three Mile Smile", easily my pick for the single most underrated Aerosmith song of the '70s.  That opening riff is simply ungodly, and the strutting, push-and-pull guitars that follow it in the verses are Perry and Whitford at their call-and-response best.  The high-octane funk of "Chiquita" rounds out the A-list, making a perfect argument as to why '70s Aerosmith should have featured horns in their songs much more often than they did.

The remaining three originals are a bit more middling.  Both "Cheese Cake" and the delightfully titled "Bone to Bone (Coney Island White Fish Boy)" feel a bit more like unfinished demos than full productions; there are fine riffs and good ideas present in both, but neither completely fulfills its potential.  Both are pleasant, but neither would have even managed to slot in on Draw the Line, let alone Rocks or Toys.  "Mia" is the obligatory closing ballad.  It seems like dirty pool to talk smack about a song someone wrote for their newborn daughter, so I'll refrain save to say that it's hardly in the same league as "Home Tonight" or "You See Me Crying."

The covers are pure Vinyl Helper.  The blues standard "Reefer Head Woman" is easily the best of the batch, but it should have been a single b-side at most, or better yet left on the stage where it's a more natural fit to the flow of things.  Their take on the girl-group classic "Remember (Walking in the Sand)" shoots for something akin to the New York Dolls and ends up more in the neighborhood of an overly leaden cover band in a scummy bar somewhere.  It serves only to demonstrate the band's sudden creative decline: for the Aerosmith of a few years earlier, it would have been a great left-field pick well suited to Steven Tyler's natural sass and bravado.  By 1979, sadly, it was little more than a Quaalude'ed mess whose presence on the band's original Greatest Hits album has always mystified me.  As for the Yardbirds' "Think About It", well, it's hard to ever remember much about it when I attempt to do just that.  A quick re-listen confirms my suspicion that it's there simply to push Night in the Ruts' total running time far enough past the thirty minute mark that Columbia Records would accept it for release and nothing more.  Mission accomplished, I suppose.

Listening to Night in the Ruts is a bit like buying a cheap beater car because you're young, broke or both.  If you're expecting a Cadillac, or a Rocks, you're going to be sorely disappointed.  If you're honest about what you're getting yourself into, you will be content with it.  More than that, actually: you will likely find things to love about it even though you wish the muffler would stop making that noise, the Check Engine light would shut off, and that they'd just ditched the covers and released a nicely streamlined, fairly ass-kicking EP instead.
Posted by Will at 6:23 PM