Wake up baby, what'choo in for?  It's a fair question wherever it may be asked of you in life, but as the signal that my single favorite under-loved Aerosmith song, from my single favorite under-loved Aerosmith album is about to begin, it never fails to grab my attention and then some.  Often enough in critical appraisals, you'll see Done with Mirrors cited as the least of all Aero-offerings.  In general, I try to be supportive of the idea that taste is subjective and, when it comes to music, that there are no wrong or right opinions.  On the other hand, it's a cliché for a reason that rules are made to be broken, so please take the following in that spirit: anyone who thinks this is a bad album needs their FUCKING HEARING CHECKED.  If that doesn't do the trick, then they need their FUCKING TASTE CHECKED as well.  Don't believe me even after that bit of unrestrained hyperbole?  Fine; the truth, as it always is with music, is in the tracks.

"My Fist Your Face" is pure, uncut Boston-via-Yonkers Steven Tyler sass and attitude, a side of his character that we've needed to see so much more often than we have in the years after 1985.  Once you realize what the torrent of clever lyrics are actually about - a trip to rehab forced upon someone who'd clearly rather have said no, no, no - they ascend to the realm of utter, unadulterated genius.  It's the best thing on this album by far, but that's no slam on Mirrors' eight other underrated gems; it would also be the best thing by far on most hard rock albums.  So, for that matter, would be the album's lone semi-hit, a reworking of "Let the Music Do the Talking", still Joe Perry's best moment as a solo artist.  The difference between the Joe Perry Project version and this one is simple and brilliant: Tyler threw out the merely average lyrics and singer featured on the original and replaced both with his inimitable self.  Result: coulda-been elevated to classic.

I could wax similarly ecstatic for the album's other seven songs, but other than needing to call out the breathless rush of "Gypsy Boots", the uniquely funny/brooding "The Reason a Dog" and yet another great closing piano tune in "Darkness" before this review is over, I'll take the band's own advice and, well, let the music do the talking.  You simply must acquire and give a fair listening to this album at some point in your life; it's a great album for new fans to discover, for old ones to rediscover, or simply for anyone who likes high-octane loud-n'-clever rock music to take a shot in the dark on in this era of file-sharing free-for-all.  I'm not simply being a drooling fan-boy when I tell you that this is, in my opinion, the single most artistically underrated item in Aerosmith's canon.  I believe it with all my heart, soul and ears.

There is only one part of the prevailing criticism of Done with Mirrors with which I agree: it was not particularly the ideal comeback album, commercially speaking.  This is not a pop album full of doctored songs and smooth edges.  It is a ROCK album, full of leers, questionable moral content, and illicit substances.  It is proof positive that Aerosmith could, were commerciality not a concern, stand on their own and still write and record a great, fierce, brilliantly composed rock album without the "help" of the squadron of song hacks they'd singlehandedly keep employed for the rest of their careers once this album tanked.  It is the last time we heard them as they were for an entire album.  Rather than mourn what was lost once the overbite was corrected, we as fans should instead celebrate this amazing parting gift we were left.  Done with Mirrors is one hell of a send-off, and it's high time it started to get its due. 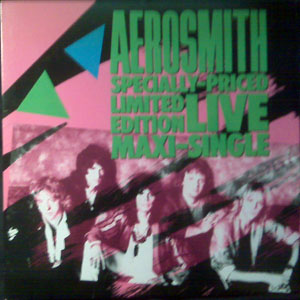 Format nerds have more fun: if you're going the vinyl route, you should be aware that the LP omits "Darkness" for some strange reason.  Never fear: it's available as the A-side of a great four-track EP that backs it with white-hot live versions of "She's on Fire", "The Hop" and "My Fist Your Face".  Until Geffen Records wises up (as if) and releases their own EXPANDED DELUXE EDITION, it's time to hook that turntable up to your computer and make your own.
Posted by Will at 6:48 PM