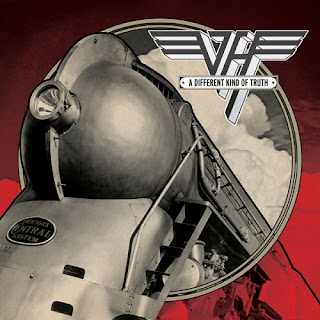 Seeing as how the Truth is now out there, at least on YouTube for the time being, I couldn't resist indulging.  On first blush, it's a pleasant surprise; it wouldn't be off the mark for me to say that I came for the train wreck and stayed for the surprisingly decent album.  I've only had a chance to listen once, so there's no telling how it'll hold up to repeat auditions, but my feeling is that anyone with reasonable expectations for A Different Kind of Truth should be at least reasonably pleased with the album.  Sure, it'll never exactly knock Fair Warning off your shelf - really, did you honestly expect it to? - but it should sit nicely next to the old classics on that shelf.  For an album made by guys who by most accounts barely speak to each other, and who haven't completed an album together in nearly thirty years, it's much stronger and more cohesive than I'd ever have guessed.

I feel like it's too soon for me to offer a definitive review, but in the meantime I'll offer some random thoughts I had while listening.  In no specific order:

* This truly sounds and feels like vintage David Lee Roth-era Van Halen.  The amount of crap they took pre-release for recycling old riffs from unused demos didn't make any sense to me before I heard the album, and it makes even less sense now.  What, exactly, is the problem with using material generated during their artistic peak as a backbone?  I'll answer that: nothing.

* Sure, Roth's voice is a bit lower, and he doesn't scream like he used to.  He's also fifty-six years old.  In terms of his phrasing and inimitable style, he's right in the pocket and on the money, and it's great to hear him in such good company once again.

* None of this sounds a damn thing like the generic arena-rock they devolved into with Sammy Hagar at the helm, thank god.  I don't care that Hagar is technically a "better" singer; he's not nearly as clever, nor as much fun as Roth, a point this album takes about thirty seconds to drive home.

* Wolfie's bass playing is just fine, but there's a huge, noticeable hole in the backing vocals where Michael Anthony's voice should be.  Whomever they're trying to auto-tune into sounding like him just ain't the same.

* At fifty minutes, it feels a couple of songs too long.  The brevity of the original run of Roth albums, none of which ventured much past the thirty-five minute mark, was one of their strengths.  It's a perfect length for such explosive music.  I don't know which songs I'd bounce - honestly, none of them sound particularly weak - but in terms of achieving maximum impact, a bit less may just have been more.  Of course, taking into account the odds that they'll never make another album given their history, this may not end up being much of a problem in the long run.