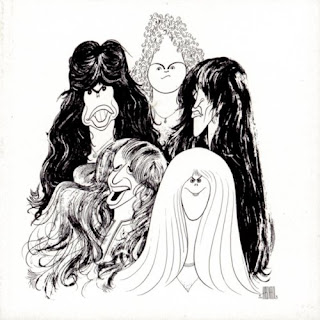 Every band needs the better than it's made out to be entry in their discography.  For a record made while the band was in the process of falling apart, Draw the Line holds up remarkably well.  True, it's not exactly a masterpiece on the level of their previous three albums, but let's be honest: very few rock albums by anybody are.  It's not exactly a fair standard.

I didn't always feel this way, however, and I'm a man who likes to give credit where due.  Rhea banged on about how much I was underrating this album for years.  "You need to listen to it again!", over and over, going so far as to make me buy a new CD copy of it a few years back out of the el cheapo bin in a Newbury Comics.  Ironically, she ended up swiping that one from me a bit later on, but she did donate in its stead a vinyl copy, and that turned out to be the trick.

A bit of a tangent is in order here: yes, I'm a vinyl guy.  Have been my whole life.  It's not a nose-in-the-air audiophile thing with me.  I like the sound and feel of vinyl for what it is, and have no interest in beating the dead horse of debating whether or not it "sounds better" than digital media.  That's all in the ear of the beholder.  I especially like vinyl for albums released prior to the late '80s, because I enjoy hearing exactly what the artists approved for mass consumption at the time.  Draw the Line is a perfect example of why I feel that way: there is something in the grooves of this record that no digital iteration - neither the original CD nor the currently-circulating '90s remaster - has managed to correctly capture.  It's something dirty, something grungy, something junked-out, something not-quite-right, possibly something infectious, but something vital to the music just the same.

The other thing lost in post-vinyl formats is the concept of the side break, and Draw the Line has an absolute doozy of one.  "Kings and Queens" is the ultimate sore thumb in the Aerosmith catalog, perhaps the only example of raunchy prog-rock ever recorded, and an all-time favorite of mine.  It needs to be experienced as the first thing you hear after a break, the FIRST SONG ON SIDE TWO, rather than just an oddball track buried somewhere in the middle of a CD or a folder of files.  Even if you don't have access to a turntable and/or a vinyl copy of Draw the Line, do both of us a favor and pause whatever it is you listen to music on for about ten or fifteen seconds between "Bright Light Fright" and "Kings and Queens" the next time you give the album a spin.  I guarantee you'll immediately get what I mean by all of this...or your money back.

Elsewhere, Draw the Line is exactly what it's always claimed to be: an album recorded and released just as its creators stepped over the line into uncontrolled excess.  It's an honest, ballsy record and if it's not as classic as its immediate predecessors, so what?  Were they really ever going to beat Rocks at its own game anyway?  Possible, I suppose, but not likely.  I think they knew it, too, and instead got real, real gone for a change.  Along with "Kings and Queens", the album's other hit was the slide-n'-swagger of its title track, still a live favorite with damn good reason.  Flash quiz: the fuck's he sayin' in that bridge?  I thought this was one of life's great unsolved mysteries until I mentioned it to Rhea, and she immediately translated the entire thing for me like it was no big thang.  Damned super-fans.  I've mentioned before that I'm a big fan of the loud 'n' fast numbers, and Draw the Line has any number of excellent ones to choose from; the one thing you can truly say in favor of cocaine abuse is that it does not lend itself to balladry.  My favorite of the batch is "Sight for Sore Eyes", a song that sounds so much like what would happen if the New York Dolls knew how to "play better" that its "D. Johansen" co-write credit comes as no surprise at all once noticed on the label.  It's also no surprise that Aerosmith - a band who knew a thing or two about being punks in the street - would be able to fashion a rejoinder to the emerging punk rock of the time that actually sounded authentic.  While I'm generally not much of a fan of Joe Perry insisting upon vocal cameos in a band that also has Steven Tyler in it, his nasal snarl fits "Bright Light Fright" like a glove.

So why isn't Draw the Line quite in the same league as the three albums that immediately preceeded it?  It's mostly a matter of range.  While it's true that Draw the Line is consistent, it's also true that the eight non-"Kings and Queens" songs are all fairly similar: loud, fast, obnoxious, debauched.  Taken one by one, they're magnificent; heard all together, they can begin to feel a bit same-y.  There's also the matter of tone: Get Your Wings, Toys in the Attic, and Rocks are the sound of a band surging, hitting peaks and surpassing them.  Draw the Line is the sound of that same band sputtering.  Granted, it's a glorious, truly elegantly wasted sputtering, but it's sputtering just the same.  In fact, I can illustrate the difference for you in just two excellent tracks: on Rocks, you've got "Back in the Saddle", one of rock's great salacious grins set to song, just dripping with all the hot sex one man's groin can handle.  This time out, you've got "Get it Up", a four minute tribute to cocaine-induced erectile dysfunction.  They're both great, clever songs, but be honest: which Steven Tyler would you really rather be/be with?

I began by crediting Rhea with forcing me to re-evaluate this album, and I'll end by crediting her again with my re-evaluation of its ending.  For years, I dismissed Draw the Line's album-closing cover of "Milk Cow Blues" as four minutes of filler, just a bit of Vinyl Helper to push the album past the thirty-minute mark.  Thanks to Rhea's insistence, and her putting the following idea in my head, I get it now: this is the sound of the loud blues band they were back on their debut, brought first to the heights they'd recently scaled, and now back down into the muddy ditch in which they'd found themselves by 1977.  The band's entire story to date is right there in those last grooves on the record.  It's a magnificent, criminally underrated performance, a fitting end to a fairly underrated album.
Posted by Will at 6:11 PM