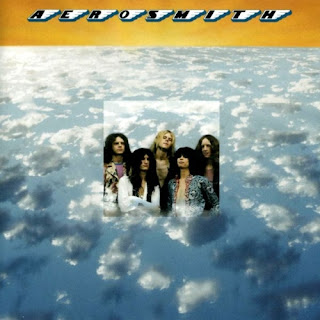 In some ways, this remains the most unique Aerosmith album.  It's their bar-band record, one step more professional than a studio demo, comprised of seven songs that never even imagined being arena-band fare, and one that never belonged anywhere but the enormo-domes of rock history.  The exception is, of course, the one song on this album you're guaranteed to know whether or not you've ever bought or downloaded a note of Aerosmith's music; it's the reason that, for years, this album was sold with a redesigned cover and the subtitle Featuring "Dream On".  Sure, it was probably the first modern power ballad and as such paved the way for plenty of crap to follow in its wake, but you can't blame genius for inspiring lousy imitations.  For many a foggy-brained early-teen, myself very much included, it was THE MOST PROFOUND FUCKING THING ON THE PLANET when we first heard it.  Twenty-odd years on it may not be quite that anymore, but it's still bad-ass in a way power ballads aren't generally supposed to be, and it's still great enough that I still generally want to hear it when it crops up, radio overkill be damned.

Aerosmith's other hit-in-retrospect is "Mama Kin", the track on here that holds the key to their future more than any other.  The version of Aerosmith that would fill the stadiums and conquer the world still hasn't quite arrived yet even on this track, but for the entirety of its 4:27 you can see their private chartered airplane heading for the tarmac.  The album's other hit-that-shoulda-been is their cover of Rufus Thomas' "Walkin' the Dog"; at fourteen years old, which I was when I bought my first copy of Aerosmith, I didn't know from Rufus Thomas, cover versions, R&B, or anything else.  I knew that the last song on that tape kicked ass and made me want to spastically move my body, likely groin first, and what more could an adolescent want from his rock 'n' roll?  Hell, all these years later it's still one of the few rock songs that makes me want to shake it.  (Should I have typed that where Rhea will read it?  Probably not!)

R&B, as it turns out, is the key to the rest of Aerosmith; it's what separates even the album's B material from other "heavy rock" of its time.  Led Zeppelin, Cream, the Rolling Stones and their ilk may have loved American R&B, may have been tremendously influenced it, but Aerosmith understood it in a way that their British forebears seemingly couldn't.  Aerosmith didn't study R&B, they played it, and it's exactly that distinction that elevates the likes of "Movin' Out", which otherwise would be fairly standard heavy blues rock of its time, above the pedestrian.  It's what makes Aerosmith still worth returning to nearly forty years after its release.  If Steven Tyler still sounds a bit more like the singer from Canned Heat than himself here and there throughout the record, if the guitars aren't quite amped up enough yet, if the rhythm section doesn't pound quite hard enough yet, well, give 'em time.  One year, to be exact.
*** 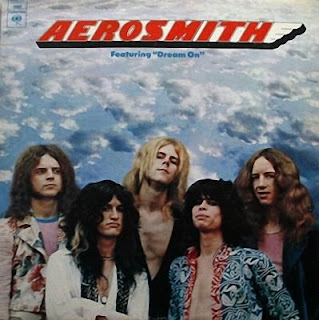 In the beginning of this post, I mentioned that for years Aerosmith became Aerosmith Featuring "Dream On", complete with a somewhat redesigned sleeve (pictured above).  The second version was what was commonly available when I first became a fan.  Around that same time, my folks bought me one of those Rare Record Price Guides for some holiday or birthday or other.  In that book, they made reference to an "orange cover" that had two variations, the rarer of which had a typo in one of the track titles listed on the back cover.  Shortly thereafter, I wandered into one of our local used vinyl emporiums, and there it was up on the wall, for the then-astounding sum of $20.  I took it down and looked at the back cover: typo?  Check!  It hurt a bit when I parted with that twenty, but I had my first bona-fide collectible.  Since then, I've chased after and found plenty of far rarer records, but man...you never forget your first.  It's still in great shape, and it still makes me smile every time I pull it out for a spin on the turntable.  Dig this: 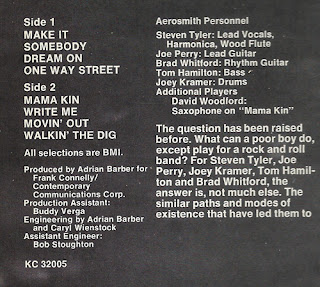