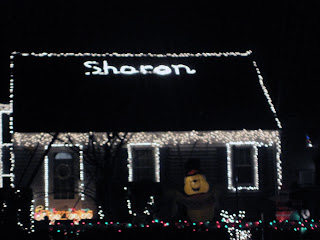 I have no idea what this is.

Rhea and I found it a few blocks south of Griswold Alley while out running an errand last night.  Eventually, we stopped laughing long enough to snap a photo.  I'm not sure why we both found it so endlessly entertaining - honestly, insufficient sleep over the past week may have played a role - but it had us literally rolling with hysterics in the car.  Obviously, it made the subject of the next 31 Holi-Days post a no-brainer.

It's now a day later.  The hysterics have been replaced by a stray giggle or two every time I look at the photo, but the mystery remains: what in the high holy hell IS this, anyway?  It's not Ozzy Osbourne's house.  Trust me, the neighborhood's too modest and what's more it's spelled correctly.  I've nothing to base this on, but I never really figured ol' Oz for a spelling bee champ.  If it's supposed to be there to alert Santa as to whose house this is, I've got some bad news for Sharon: he's gonna need a bit more information.  Do you have any idea how many Sharons there are in America?  Neither do I; what, do you think this blog can afford a research staff?  Please: just be happy that Blogspot is a free service of the kind wunder-geeks over at Google.  All of that aside, it's a pretty fair bet that the number of Sharons in America - hell, in my town even - is at least greater than one.  It's a busy time of year for Kris Kringle: cut the big man some slack and at least add the first letter of your last name, wouldya?

Of course, it's also possible that Sharon isn't a child at all.  In which case: god help us, every one.
Posted by Will at 10:16 AM