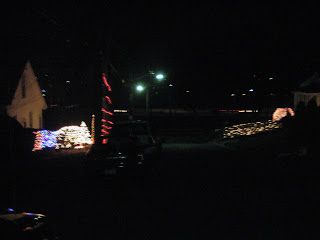 It's modest and a bit out of focus now, I grant you.  It looks like no big deal: a few Christmas lights decorating the houses/yards of a couple of houses on a typical suburban street.  It won't stay that way for long, though: by the next time I post a picture from this same perspective, you will fully understand why I begin referring to my generally quiet little block as Griswold Alley during the holidays.

I've never gotten the feeling from my neighbors that it's about one-upsmanship.  There's just an abundance of holiday spirit on my block, and that's a really nice thing.  Still, though, by my estimate we've got about another week-to-ten-days to go until my sleepy, hidden patch of road turns into an electronic wonderland that would make both the average child and Al Gore wide-eyed and red-faced for completely different reasons.

It's completely over the top.  It's utterly ridiculous.  It's also awesome to be able to walk out into the street in my pajamas and see a display that's fully capable of extending an electronically controlled, LED-lit middle finger to anything short of Fifth Avenue itself.

Merry Christmas to all, and to Con Ed a great billing cycle.
Posted by Will at 2:54 PM