Time for a little reality check, and a little togetherness: Christmas is one week from RIGHT NOW.  For my Jewish friends, Chanukah begins in less than forty-eight hours.  Kwanzaa begins on the 26th, and I've got it on good authority that Festivus begins, well, sometime in the next week or so.  That's the reality of the situation; as for the togetherness, let us now bow our heads in unison, regardless of our celebrational differences, and begin to swear at the gift wrap, scissors, and tape.  Can I get an oh, hell yeah from the congregation? 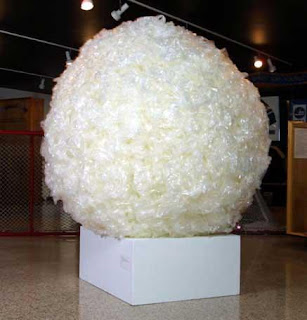 The photograph above is of the world's largest ball of tape, photographed in 2001 at the International Ice Hockey Hall of Fame in Kingston, Ontario.  (This is a Turned on Its Ear first, loyal readers: the attribution of a photo blatantly swiped via a Google Images search.  It's a holiday miracle, I know).  Until a decade ago, it also might as well have been a photo of any random gift I gave somebody.  A decade or so working for Borders cured me of this malady, to an extent.  I can now wrap things that come in standard, square or rectangular shaped packages like a semi-pro.  Listening to the Real Housewives of Scarsdale nitpick your every sexy bit of cutting, taping and tucking will school you in the art of wrapping well - or at least in the equally-important art of hiding your mistakes efficiently - in a hurry.

I'm certain that some of you caught the qualifier in that last paragraph: standard, square or rectangular shaped packages.  What follows is a desperate plea to the manufacturers and shippers of America (and, more likely than not, China): please, for the love of Santa, can you maybe not package things in a tin the shape of someone's head?  Might you possibly entertain the notion of declaring a moratorium on packages that are round?  Perhaps you could add a few cents to the packaging budget and not use a plastic blister pack with all sorts of things jutting out from it at odd, sharp angles?  I know, it's radical thinking, but stay with me here.  If I did not have to wrap these sorts of things, I would not have to emit an annual string of obscenities that makes the old man in A Christmas Story's battle with the boiler sound like Pat Boone reading from the Bible by comparison.  I would have more time to be with my family, to bake cookies and pet puppies and build snowmen...

...whoops, I meant shop more.  Last-minute shopping, even.  It would be good for the economy.  It would be good for America and for freedom and for not letting the terrorists win.  Most of all, it would be good for my thumb to go through at least one Christmas season without being stabbed by the scissors.  Speaking of the scissors, did I lose them again?  Damn it!  I just had the fucking things one minute ago!  Son of a bitch where the hell...oh god, really, am I sitting on them?  I am!  Shit!
Posted by Will at 8:18 PM