It was torture when I was a kid.  All I wanted was to see the tree lights turn on.  Who possibly cared about the pop stars of the day lip syncing whatever silly holiday record they had out at the time?  To be completely honest, I still feel pretty much the same all these years later.  I still consider the tree's lighting the true beginning of the holiday season, and I still wish they'd send most of the variety-show dreck packing.  Fortunately, with age comes control over the remote: this year, I didn't even bother with the first half of the show, so if anything memorable and/or embarrassing happened in that span, sorry.

Anyway, here's what I did catch, in order:

Justin Bieber:  Okay, I'm just confused.  Why is he dressed as though he bought his Little Drummer Boy outfit at an S&M shop in the West Village?  Does he sing in Auto-tune, or is he using the T-PAIN MICROPHONE I saw in last week's Target ad?  What in the hell is Busta Rhymes doing on that stage?  Why did anyone involved in this think that "The Little Drummer Boy" (the song, not the bondage gear) would make a good basis for some sort of hip-hop mash-up?  Most importantly, is it ever easy, in any era, to be a teenager? 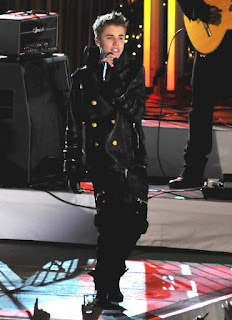 Michael Buble: Sorry, but he's just a bit too smarmy to sound sincere, and not smarmy in a clever enough way to be entertainingly insincere.  This guy thinks he's the next Sinatra?  Please: he's not even good enough to open for Richard Cheese.

Carole King: She's a legend, and this is actually tasteful.  How on Earth did it end up on this show?  She looks her age, and she looks good for her age.  I like that.

Neil Diamond: Ehh, what can you say?  Complaining that he's schmaltzy is somewhat akin to complaining that ice cream is cold: he is, it is, and what else did you expect?  His voice sounds like it has held up well, and his outfit was surprisingly tasteful, by which I mean he left his rhinestones at home.  If you like him, you probably enjoyed this.  Time for me to walk the dog.

Tony Bennett: Missed most of this; the dog needed to poop.  He looks like he has for the last couple of decades, though: as though his jacket is hiding the wind-up toy style key in his back.

Big Time Rush: Nickelodeon boy band, sounds exactly like it reads.  It would have been far funnier if they'd had just plain Rush on instead.  Wouldn't you like to hear Geddy screech out a few carols around a drum solo?  I might even pay a small amount of money for the privilege.

Javier Colon: I've never watched The Voice, and this isn't exactly making me feel like I've missed anything.  I don't trust any singer who makes constipation faces while they perform.  Celine Dion's Disease, I believe the condition is called.  Didn't Michael Bolton die from it?

Katharine McPhee: The hell is she doing here?  Isn't Idol on a different network?  She was bland then, she's bland now, and since the dog doesn't have to poop again I suppose I'll start my laundry while this is on.  She won't mind - after all, words can't bring her down.

The Rockettes: Anachronistic leftover from the sexist attitudes of yesteryear or enduring symbol of female can-do-ness?  Please answer in five hundred words or less.  Double space and leave appropriate margins.

Justin Bieber & Mariah Carey (music video): I'd like to take advantage of this historic moment to extend my heartfelt congratulations to (the otherwise great) Daryl Hall & John Oates.  Gentlemen, it has been decades in the making, but you are no longer responsible for the worst Christmas video of all time.  Feel free to celebrate accordingly.

Michael Buble (again): See above; my opinion hasn't changed in the last hour.  This time around, the backing singer behind him to his left looks a bit like my friend Sean.  You'd have to hear Sean sing to know why this is amusing me so greatly right now, I suppose.

The Tree: The reason we're all really here.  It's breathtaking, as it is every year.  Long may it dwarf silly pop stars in both physical and perceived stature.
Posted by Will at 12:36 PM