First and foremost: Steve Jobs has had the ultimate mantle of coolness-in-death bestowed upon him: the Westboro Baptist Church, everybody's favorite god-lovin', "fag"-hatin', wacky inbred fun bunch, will be protesting his funeral.  But wait: that's not all!  It is said that a picture is worth a thousand words.  I don't really know how one would vet that particular bit of math, but I do know that the following picture made my entire week: 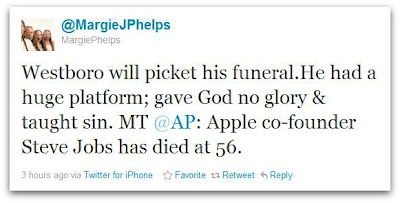 You noticed the bottom line of that, right?  "3 hours ago via Twitter for iPhone".  Fucking tremendous.  Swear to god, if I had any disposable income right now, I'd be on my way to the Apple Store for an iSomething right this very minute.

Unfortunately, the Westboro Baptist Bozos don't quite have an exclusive on dipshit-ness where the late Apple head is concerned.  Elsewhere on the web, in a forum populated by the lamest of record-collector shut-ins, I came across this gem: some dude would like to make it known that he will not mourn Mr. Jobs because he was responsible for the death of the music industry.  You know, damn kids and their iPods and all of that.  (I'm deliberately neglecting to provide a link; behavior this idiotic and callous really shouldn't be rewarded with a traffic bump.)

Not only is this CD-spinnin' cousin of the Simpsons' Comic Book Guy a reprehensible human being ("you took my record stores, you deserve to die!"), he's also factually 100% incorrect.  Jobs - via the iPod and iTunes - didn't kill the record industry at all.  The record industry committed hari-kari, the end result of decades worth of price gouging on substandard products.  Quite the contrary: Jobs and Apple were the business end of the music industry's only success story of the past decade.  Apple was the only company to meet the future head-on: first, they developed a portable new-media player that was both better constructed and far more user-friendly than any of its competition, and then they built an online sales portal that seamlessly integrated with their new devices.  Casual music buyers - always the backbone of the industry, no matter what the collector types would like to believe - flocked in droves, and why not?  iTunes offered a nearly unlimited selection at reasonable prices, all completely hassle-free.  Look, I miss the visceral, human experience of old-school music shopping as much as the next nerd, but let's look logically at the facts for a moment: with iTunes, Apple created an alternative to that experience that meshed well with the lifestyle of the average, occasional music buyer.  The fact that iTunes remains essentially without serious competition, no matter how hard Amazon tries, a decade later should really tell you all you need to know.  It was a brilliant, visionary idea executed with flawless precision, which is no mean feat in any industry.

Third and last point: I seriously understated something in last night's post.  I don't just love my iPod; I have no idea how I ever lived without it. Given even the slightest bit of thought, the Walkmen and Discmen of yore just seem so much more archaic than things that really only checked out of common usage within the last decade.  Literally thousands of albums live in my pocket at any given time, all in a device no bigger than an old cassette case.  Seriously: what more could a music geek want?

Mr. Jobs, you have my sincerest gratitude.  Rest in peace.