The Nils: "The Title is the Secret Song" 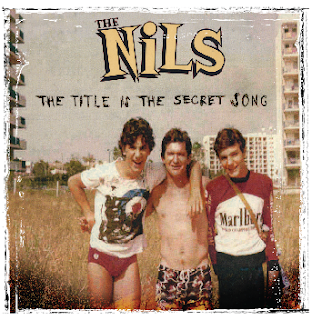 How'd I miss this for the better part of a year?  God, I really do need to remind myself to troll iTunes more in this day and age of declining physical releases for relatively obscure music.  I've posted elsewhere on this blog about my admiration for the Nils, a Canadian band firmly in the Replacements/later Hüsker Dü mold.  Their leader, guitarist/singer Alex Soria, was both their passport and their undoing, yet another brilliantly talented guy who couldn't escape his personal demons.  Ultimately, he threw himself in front of a train a few years back, sadly putting paid once and for all to a career in music that really could have amounted to something.

The Nils didn't leave too much behind, either: a handful of EPs and compilation appearances compiled, along with some live stuff, on 1996's Green Fields in Daylight, along with a self-titled full-length LP that remains one of my absolute favorites of its era.  The Nils is every bit the equivalent of Flip Your Wig or Pleased to Meet Me, and anyone who wants to tell you differently is lying.  For years, since I first stumbled on it back in 1998 or so, it has left me wondering what a follow up would have sounded like.  It's rare that rock 'n' roll ever answers questions like this, but earlier today when I stumbled upon this release, it did just that.

Sanctioned by Alex's brother Carlos, the band's other guitarist, The Title is the Secret Song collects the Nils' studio leftovers.  Information on exactly when any of this was recorded is nonexistent, but my ears tell me that this is compiled from different sessions, and that all of it probably post-dates the 1987 self-titled album.  One song is familiar: "When You're Not Around" was an easy highlight of Mala Leche, the excellent lone EP by Alex's short-lived post-Nils band Chino, as it is here as well, albeit in a somewhat different arrangement.  By necessity, The Title is the Secret Song isn't as unified as The Nils, but song for song it's nearly as strong.  It's predictable in a good way: while about half of the material would sound at home as-is on the 1987 LP, the other half finds Alex, Carlos and their band mates becoming more comfortable with slower tempos and more complex material.  It sounds exactly like what I always imagined Nils II to be in my mind, and I can't imagine a higher compliment for a posthumous compilation than that.  Except this: I'd recommend this even to folks who've never heard the band before.  How many after-the-fact stitch-togethers of unreleased material can that truly be said of?

Of course, I'd have preferred it if Alex Soria's second act had come while he was still drawing air.  Still, The Title is the Secret Song is a long-shot wish fulfilled for a fan like me, who only found The Nils well after they had left the building.  I now know what that second full-length would have sounded like - and, best of all, I can go listen to it again and again, as I'm about to do right now.

Available from iTunes here: The Title Is the Secret Song - The Nils
Posted by Will at 11:03 PM