Richard Cheese: "A Lounge Supreme", and Some Thoughts on the Economics of Comedy 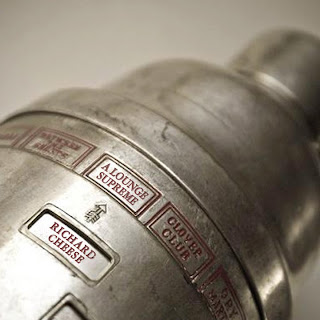 It’s a funny thing: in general, I’m not much of a fan of musical novelty acts.  Not because I think the form is sacred and that comedy defiles it or some such pretentious twaddle, but because most of them are either not musical enough, not funny enough, or both.  In the seven-or-so years since I first bought one of his albums on a New Year's Eve whim, Richard Cheese has been the exception to this rule for me: he is both exceptionally funny and surprisingly musical, not to mention far less of a one-note joke than you’d ever imagine.

A Lounge Supreme, Mr. Cheese’s ninth studio album, finds the shtick of the World’s Loudest Lounge Singer far from dried out.  If you’re not familiar with his work, the concept is relatively simple: imagine Bill Murray’s classic Saturday Night Live lounge lizard character taken to its logical conclusion.  Mr. Cheese renders pop and rock songs as written, all lyrics intact in his inimitable, loungin’ style.  Often, this allows the jokes to make themselves: the infamous “fuck you, I won’t do what you tell me” chorus of Rage Against the Machine’s “Killing in the Name” sounds suitably idiotic and bombastic when delivered in a style suggestive of Frank Sinatra having been told he was cut off a bit too long before last call for his liking.  A simple scan of the track list illuminates some easy highlights: garbage like “Friday” or “Boom Boom Pow” is seemingly tailor made for the Cheese treatment, and how on earth did it take him more than a decade to get around to “Margaritaville”?  The highlight, as usual, is somewhat unexpected: while Mr. Cheese’s new “Birthday Song” may not exactly be the greatest composition in the history of music, his lengthy, spoken explanation on how he came to write it is laugh-out-loud funny.  As for the Scorpions cover, or the Fred Schneider guest spot, well, I’ll let you discover the charms of those for yourselves.  As usual, all of these antics are delivered with pin-point precision: Mr. Cheese’s vocals and characterizations are spot-on, and his musicians’ playing and arrangements are typically careful and crafty, rendering the proceedings doubly funny by being of such a high standard.

Now for the morality play: I implore you, dear readers, to back away from the search box on your torrent tracker of choice and instead lay down some of your hard-earned for this one.  Usually, I’m not one to get on any kind of high horse about downloading.  Page back through this blog: more than once, I’ve flippantly started to write something like “downloaded from Demonoid” and sarcastically interrupted it with some variation on “I mean, bought at my local record store that certainly didn’t close five years ago.”  I’ll stand behind that bit of snark, too: I’ve no problem with no longer paying for music that turns out to not really be worth the price of admission once I’ve heard it.  Similarly, I’ve no problem ignoring the whining of rock stars that have already collected enough money: if Bono never gets another cent from me, somehow I think that both he and I will sleep just fine regardless.

So why stop the buck for this one?  Two reasons, actually.  Firstly, it can’t exactly be amazingly profitable to be Richard Cheese.  Without knowing the exact economics of it all, I’d imagine that a good chunk of any profits from record sales, physical or digital, fly immediately out his window simply because he is predominantly a covers artist, and thus must pay publishing royalties to those who wrote the songs he performs rather than keeping the whole album-sales bounty for himself.  Beyond that, I’m sure that illegal downloading has hit Mr. Cheese harder than most, simply because of the “novelty” aspect of what he does.  Doubtlessly, more than one person has thought something along the lines of “well, it’s only comedy, so I’ll just download it instead.”  The inherent wrong-ness of that statement brings us to the second reason to pay Mr. Cheese his due: he consistently releases quality products.  Concepts like “novelty” and “comedy” be damned: the amount of time and craft that goes into the track selections and arrangements on an average Richard Cheese album are obvious to anyone willing to listen at all carefully to the finished product, and certainly comparable – and often superior – to what goes into making a “serious” album.  Personally, I’ve no compunction with keeping my wallet in my pocket when it comes to mediocrity, but I remain ready and willing to pay for quality.  Quality comedy is no exception to that rule.

Only a limited amount of A Lounge Supreme CDs were pressed; if you’re lucky, there’s still a few left to be had over at Mr. Cheese’s Lounge Mart.  The packaging, a six-panel digipak complete with an 8-page booklet, is beautifully designed and will look great either on your shelf or under your martini glass.  The music itself, be it on disc or legal download, will pull you in with the belly laughs and keep you coming back for the toe-tapping.  What more can you ask from your entertainment dollar, really?

That address again: www.loungemart.com
Posted by Will at 8:16 PM