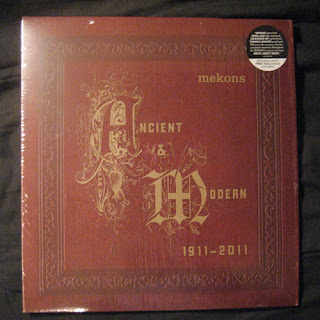 What an absolute relief.  When last we caught up with the Mekons on record, four years ago on Natural, things didn't seem quite right with one of rock 'n' roll's most truly original - and obnoxiously unsung - bands.  For the first time in their lengthy career, the Mekons seemed defeated in a bad way on that record: "you don't have to believe in the end/you have to believe this is the end" went the chorus of Natural's catchiest number.  In some ways, the Mekons' entire catalog is a celebration of defeat, of the joys of being an eternal underdog, but Natural was the sound of a band accepting defeat, which is a far cry from raging against it or reveling in it.  It was a strong album, and one appropriate to its era of release and ultimate subject - the human devastation left behind by nearly eight years of George W. Bush and the world he created - but it was also a sad one.  Who, after all, can be counted on to counter the dying of the light if not the Mekons?

I'm happy to report that all of that was just a symptom of the age. Ancient and Modern finds the Mekons rollicking along once more, their collective position as one of rock's great groups of raconteurs again on proud display.  As suggested by its 1911-2011 subtitle, the new album centers around the last century of human history as recounted by a group of master storytellers, all parallels between then and now duly noted.  In the hands of lesser bands, the entire conceit would smack of pretense; for the Mekons, it is instead charming - and accomplishable.

Like most of the Mekons' output of the last decade and a half or so, Ancient and Modern is largely folk-based.  As such, the only disappointment it might offer is to anyone looking for another album's worth of Mekons Rock 'n' Roll-style sturm und drang.  None of this is to suggest that the band have abandoned loud post-punk completely: "Space in Your Face" is one of the best stompers they've put forth in years, and the likes of "Honey Bear" and "Calling All Demons" aren't far behind it.  For all of that good stuff, however, Ancient and Modern's heart beats loudest in its quieter moments, as typified by the utter dignity of the gorgeous Tom Greenhalgh-helmed "I Go to Sleep" or the verbose, engrossing title track.  Quirks, as ever, abound as well: the Sally Timms-led cabaret of "Geeshie" is certainly a new wrinkle, and a delightful one at that.

In some ways, the Mekons are almost a bit too good for their own good: Timms, Greenhalgh and Jon Langford are as great vocally as ever, and the group they collectively front is easily one of the most instrumentally accomplished and versatile that rock as a genre has ever produced.  They're always so on-point that it's easy to take them for granted, to mistake something that seems effortless for something that actually is.  It's too late now for the rest of the world to catch on; the Mekons tried several times to meet it halfway and failed, as some would claim they by their very nature had to.  It is not too late, however, for them to become your new favorite band.  If you've never heard them before, their aforementioned 1989 LP The Mekons Rock 'n' Roll remains the place to start; once hooked, you should work simultaneously forward and backward through the catalog from there.  If you've been around these parts before, Ancient and Modern is yet another fine LP, or perhaps even a bit more than that.  Time will tell, but it does, at first blush, seem to have that little something extra to it.
Posted by Will at 7:36 PM