My Week of Questionable Listening Part 2: Of Cheap Tricks and Lightning

Honestly, this would be the only one of our week of concerts that neither Rhea nor I would tag as questionable listening, but sometimes you can’t fight with a good series title.  In the last segment, I talked a little bit about the cool things that only locals can tell you about an area.  The absolute reverse of that comes with being a New Yorker: there is so much to see and do in the Apple that no one ever really gets to all of it.  Sometimes, though, you get a chance to cross off something you should have done years before, like when your favorite band ends up playing a free show just off the Boardwalk at Coney Island, a place that  you’re a bit ashamed to admit you’ve never been, at least if  you happen to be me.  I don’t know how it happened, given that it’s just within the last year that I’ve even been amenable to eating hot dogs other than Nathan’s, but that’s just how things go sometimes.
When we started out for NYC, there wasn’t a cloud visible in a beautiful, blue summer sky.  We left the car uptown, opting to take the subway out to Coney and not have to deal with the parking situation out there.  Times Square to Coney Island on the N train has to be one of the longest subway rides in the world, by the way.  Still, we make our way out there; even with a stop at Uncle Louie G for Rhea to grab an Italian Ice, the line to get into the venue is hardly ridiculously long by the time we get on it.  The gates open as close to on time as these things ever happen, and we stake out  seats reasonably close to the stage, maybe ten or fifteen rows or so back.  Shortly thereafter, the evening started to get strange.
It began with the fight: two fifty-or-sixty somethings nearly coming to blows over who had laid claim to the seats in front of us first.  Absolutely ridiculous; amazingly, the confrontation nearly became physical until the police – that’s right, folks, the po-po – finally stepped in and sent the more obnoxious of the two to the corner.  It’s not like there weren’t a million other seats with the same sightline available in the surrounding area, either.  While I’d love it for them if Cheap Trick seats were such a hot commodity, I think we all know the truth on that score.  Fortunately for Rhea and I, the folks next to us chose to sit with us specifically because I was wearing an obnoxious yellow Rockford album-cover shirt; they became fast friends and good company over the next three hours.
Yep.  Three hours.  Instead of the opening band, we got Brooklyn Borough President Marty Markowitz, a man I had never heard of prior to this night but now feel like I might one day be obligated to spend Passover with.  I’ve no idea if Markowitz is a “good” politician or not, but I’m certain the man knows how to promote himself.  I wish I’d got a shot of the banner over the stage; it didn’t exactly say MARTY MARKOWITZ presents a MARTY MARKOWITZ production of (cheap trick) brought to you by MARTY MARKOWITZ, but it might as well have.  The guy’s gotta be seen to be believed as well; here’s a photo stolen from Cheap Trick’s official site of the man himself along with some other dudes we’ve been discussing on this blog from time to time. 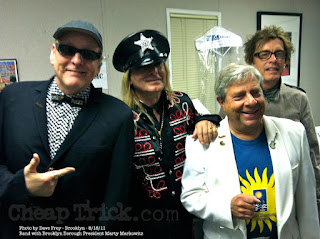 Anyway, Marty informs us that we are about to be hit by a storm, and that he will do all he can to make sure we see the show tonight once it passes.  On the first of those claims, Marty was dead on: within twenty minutes, we were treated to pouring rain as well as a lightning show the likes of which I’d only ever seen on TV.  Honestly, as opening acts go, I’ve seen far worse.  Just before 10 PM, Marty took the stage again, this time speaking via hand-held bullhorn, and announces that they are going to scrub the opening band, attempt to get the stage cleared up, and bring out Cheap Trick.  This is exactly what happens over the next thirty minutes; once power is restored, we are entertained by Marty explaining why he wears a white jacket and white shoes, and then thanking every last human being who has ever made a financial contribution to him by name.  At long last, the stage goes dark and a very familiar intro tape begins to play.
Cheap Trick take the stage: they are on fire.  I’ve seen them live countless times, and I know when they’re particularly “on”.  This is one of those nights: the set list is to die for, and the band members are bringing their “A” stuff.  About half an hour in, we see a stagehand gesture to Rick Nielsen between songs; the two exchange words, and Rick stomps – visibly angry – over to a microphone.  “They say that there’s more lightning in the area, and we’ve got to stop playing.  What do you think?”  The crowd – a surprising percentage of whom have stayed through the previous storm – roars its disapproval.  Rick saunters back to the side of the stage, speaking and gesticulating at the stagehand.  He returns to the microphone.  “Okay.  They’re going to let us play one more song, so we’re going to make it a long one.”  My new friend to my right and I call it immediately, in unison: “Gonna Raise Hell.”  Halfway through – right as the “Mother!” section is about to start – the plug is pulled.  Nielsen exits with a truly disgusted “Just so you know, it’s not us.  We want to play.”  Markowitz, who was very visible when this concert was still going to go on, damn it, was nowhere to be found once it was prematurely ended.  Typical politician.
Rhea and I decided to make the best of things, and head on down to Nathan’s for some hot dogs.  It was sitting on their patio munching away that I began to mull the concept of quality vs. quantity.  I’ve paid good money to see Cheap Trick play thirty-five minute opening sets simply because it was the only time they were going to be around that year, and not one of them had a set list that looked like this: Just Got Back > California Man > Oh, Candy > I Want You to Want Me > She’s Tight > He’s a Whore > (half of) Gonna Raise Hell.  That’s certainly a lot more than nothing, and also a lot more than a half hour consisting of “I Want You to Want Me”, “Surrender”, “Dream Police”, “The Flame” and two more evergreens.  At that moment, I reached contentment with the entire thing: of course, I’d love to know where that set list was ultimately heading, but what we had been able to see was brilliant, and it was all an adventure we’d not soon forget.
Five minutes later, the fireworks started. Literally, and loudly, coming from the Brooklyn Cyclones’ stadium.   Apparently, the weather was conducive to explosives, but not to a rock concert.  At that moment, I decided that Marty Markowitz is a first-class jackass.
Posted by Will at 5:27 PM