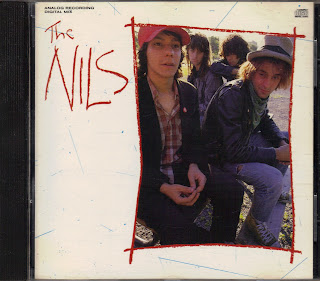 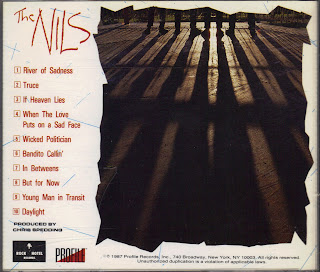 The Nils: The Nils (Rock Hotel/Profile, PCD-1245, 1987)
It’s been forever since I dusted this one off.  I’m not sure exactly what put it in my mind when I got up this morning, but I’m absolutely thrilled that it got there.  Given their absolutely perfect mix of early Cheap Trick and mid-period Replacements, it’s almost hard to believe the Nils were Canadian: any new listener would be easily forgiven for thinking they must have hailed from the power-poppin’ Midwest.
If you’ve read this far into my blog, it should be apparent by now that I’m no stranger to the dollar bin in any record store I’ve ever visited.  While I’ve mined plenty of gold over the years, this great CD stands as my all-time golden nugget.  I found it back in 1996/7 or so in a now defunct Record Theatre store in Syracuse, NY.  ‘Twas serendipitous, really: I’d just read a review of the then new-ish Green Fields in Daylight compilation (which collects nearly everything the band recorded save this LP) in Jack Rabid’s Big Takeover magazine, and had shortlisted the Nils as a band to look into based on his comments.  In his review of Green Fields, Rabid mostly shrugged off this, the band’s only full-length LP, owing to what he felt was a dull production job by Chris Spedding.  Still, it was sitting in front of me for 99 cents, still new and sealed in its original blister-pack long-box.  No use resisting it, right?
No use at all: this is a truly phenomenal album.  Personally, I disagree with Rabid on Spedding’s production: while you’d never mistake it for, say, a Steely Dan LP, the production on The Nils has aged quite well for a 1987 release.  Everything’s nice and clear, and the album boasts a big, layered sound that doesn’t overwhelm the rhythm section.  I suppose that fans of the band’s more raucous sounding EP’s might have been taken a bit aback on first blush, but as a recording clearly meant to attract new fans, The Nils does the job.  Of course, all of this would be meaningless if the songs weren’t as amazing as they are.  10 tracks, not an ounce of fat or filler.  It’s hard to pick favorites, but if “Young Man in Transit” isn’t a classic every bit on the level of the best Hüsker Dü or Replacements, I’ll track down and eat the blister pack this thing came imprisoned in.
Unfortunately, The Nils was more or less the end of the road for the band: leader Alex Soria was by all accounts a fairly troubled soul whose personal difficulties and addictions ultimately led to his sad suicide in 2004.  For the ten songs and thirty-five minutes of The Nils though, he remains very much alive.  It’s unfortunate that not enough people caught on to his perfect collision of Heaven Tonight, Pleased to Meet Me, and Warehouse: Songs and Stories in its time, but that’s no reason for fans of any of the aforementioned classics to miss it now.  Fans of all three should stop reading and start acquiring immediately.
[Per Amazon at publication time, the vinyl is available for reasonable prices, the CD goes for collector cash, and the MP3 download is well worth the investment at $9.]
No “Young Man in Transit” on YouTube, but a couple of the others are: