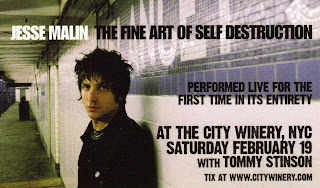 JESSE MALIN & THE ST. MARKS SOCIAL
performing The Fine Art of Self Destruction
City Winery, NYC - February 19, 2011 - Early Show
I’ll get the music-critic part out of the way first: Jesse Malin is a first-rate performer and songwriter, and his current band, the St. Marks Social, plays his material exactly as it’s supposed to be played.  Their performance of Malin’s first solo album, The Fine Art of Self Destruction, was a textbook example of how an album show should be staged.  The band, none of whom played on the original album, walked the line between honoring the original arrangements and putting their own fingerprints on the proceedings perfectly.  Malin is a master storyteller, and his insights into the hows and whys of Fine Art’s songwriting was illuminating and entertaining without ever succumbing to self-indulgence.  In short, it was yet another pitch-perfect show from NYC’s finest songwriter and his remarkably able band.  Should they be performing near you, my advice is the same as always: run, don’t walk.
On a more personal level, this was a far heavier show than I’d have expected it to be walking in the door.  Rhea and I generally see Malin when he plays locally, for all of the reasons stated above.  When I first bought tickets to this show, the fact that it was an album show for Fine Art was pretty much an afterthought for me: honestly, there’s not much in his catalog that I wouldn’t want to hear Malin play at a gig.  By the third song or so in, I was dug deep into my own history with this music: where I was when I’d first heard it, and how far I’ve come since.
A brief bit of history: The Fine Art of Self Destruction traces its roots (and three of its pivotal songs, “Downliner”, “Brooklyn”, and “Solitaire”) to an album entitled To Be Somebody, the lone LP by Bellvue, a band Malin briefly fronted between D Generation’s demise and his solo career.  To Be Somebody is one dark album: brilliant, but perhaps best first-encountered while you’re a card-carrying member of the broken hearts club.  As it happened, I was one at the time, hammered hard by a tough breakup and, three weeks later, the events of September 11, 2001.  It’s hard to handle something you can’t touch.  Ain’t it the truth.
A year and a piece later, things were looking up a bit.  Healed?  Not hardly, but I’d met and begun to become bar friends with Rhea, herself fresh from what had seemed like the end of the line.  Together, we started to splash enough alcohol on our wounds to anesthetize them; from there, they began to heal for real without us even knowing.  It was into this scenario that Fine Art was released: you’d hardly call it the happiest album ever made, but it certainly allowed more light to pass through its windows than its predecessor.
And now, it’s early 2011.  I’m sitting at a table with Rhea, who’s been my companion ever since and will be forevermore, listening to Jesse Malin sing these songs in order and talk about them, clearly from an older/wiser perspective.  The three from To Be Somebody actually pre-date my meeting Rhea, but all of them have been there in the background through the whole ride.  It’s in this moment that sad songs turn into a celebration, that breakup songs become part and parcel to the glue that holds something later and better together.
Singing these particular choruses never felt so good.
Other thoughts: the venue was a little weird for this particular show, and I’m saying that as someone who’s seen Malin on a cruise ship, for God’s sake.  Through no fault of Malin’s, there was a palpable disconnect between his gritty, lived-in music and the frou-frou surroundings.  Still, there’s something to be said for having your $8 beer brought to you; it’s a nice, pseudo-luxurious spin on the usual NYC overpriced-bar shuffle.  Opening the show was ex-Replacements (and, erm, current Guns ‘n’ Roses) bassist Tommy Stinson.  Despite my love for the ‘Mats, I’ve never really done much time with Tommy’s solo stuff.  Judging by the quality of his six-song set, I’ll be rectifying that situation post-haste.
Posted by Will at 9:24 PM